Design of a High Precision Temperature Measurement System Based on PT1000

Precision chemistry, biomedicine, fine chemicals, precision instruments and other fields have extremely high requirements for temperature control accuracy, and the core of temperature control is temperature measurement. Measuring temperature with platinum resistance is an effective high-precision temperature measurement method, but it has the following difficulties: Lead resistance, self-heating effect, component drift, and platinum resistance sensor accuracy. Among them, reducing the influence of lead resistance is a key point for high-precision measurement. For the self-heating effect, according to the component heating formula P=I2R, the current flowing through the component must be made small enough to make the heat generation small, and the sensor can detect the correct temperature. However, too small a current will reduce the signal-to-noise ratio, and the accuracy is difficult to guarantee. In addition, some components and instruments are difficult to meet component drift and platinum resistance sensor accuracy requirements. 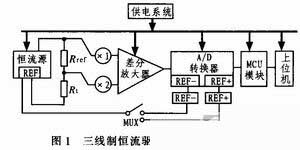 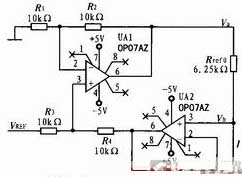 Let the potentials at the upper and lower ends of the reference resistor Rref in Fig. 2 respectively Va and Vb, Va is the output of the in-phase adder UA1. When the resistor R1=R2 and R3=R4, then Va=VREFx+Vb, so the output current of the constant current source is:

It can be seen that the dual op amp constant current source has the following remarkable features:
1) The load can be grounded;
2) When the op amp is powered by dual power supplies, the output current is bipolar;
3) The constant current magnitude is achieved by changing the input reference reference VREF or adjusting the reference resistor Rref0. It is easy to obtain stable small current and compensated calibration.

2.2 Signal Conditioning Circuit
The signal conditioning circuit is shown in Figure 3. The amplifier UA3 unit-amplifies the terminal voltage of the reference resistor Rref to obtain a differential amplifier inverting input signal. Its value is:

The amplifier UA4 amplifies the terminal voltage of the temperature sensor Rt (PT1000) by 2 times to obtain the forward input signal of the differential amplifier. Its value is:

Among them, the selection principle of the resistors R5 and R6 is the same as the principle of selecting the proportional resistance in the previous constant current source analysis, that is, by screening a large number of common nominal resistors, the closest resistance is selected. 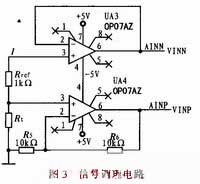 2.3 A / D conversion circuit
The A/D conversion circuit is implemented by an integrated A/D converter AD7712, which will also perform differential amplification of the instrumentation amplifier using its internal PGA. The AD7712 is a high precision A/D converter suitable for low frequency measurements. The chip contains two input channels, AIN1 and AIN2, which convert the analog signal into a serial data output. The principle circuit of data conversion acquisition using AD7712 is shown in Figure 4. It needs to be configured during actual work. The differential input channel AIN1 is selected and the input signal polarity is bipolar. 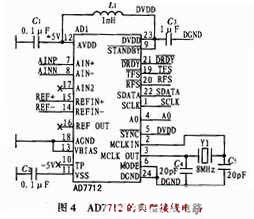 The error of the measurement result mainly comes from the error of the reference resistors Rref and Rref0, and the error of the differential amplification factor k and the conversion output of the A/D converter. In order to achieve the required measurement accuracy, the reference resistors Rref, Rref0 will use a custom UPR plastic foil foil resistor, which has an O. 05% initial accuracy, less than 5 ppm temperature stability. The nonlinear error of AD7712 is less than O. 001 5%, gain temperature stability is less than 2 ppm. And the AD7712 can be calibrated by a single-chip microcomputer to reduce its nonlinear error and gain error. 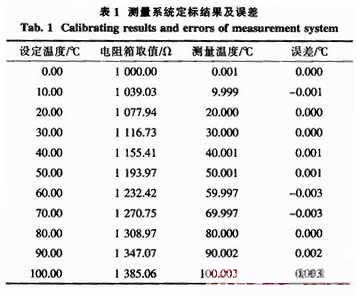 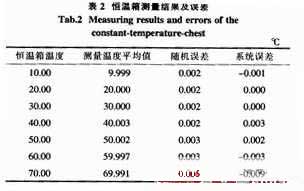 
4. In conclusion
The Pt1000 platinum resistance is driven by a three-wire constant current source, which effectively overcomes the influence of wire resistance and self-heating effect on measurement accuracy; Using the single-chip microcomputer to calculate the two measured voltages under the bipolar driving current can effectively avoid the systematic error caused by the wiring barrier voltage and the offset and drift of the amplifier and A/D converter; The constant current source and the A/D converter share a reference reference, which effectively eliminates the error caused by the instability of the reference reference. The MLS numerical algorithm is used to cancel the noise in the host computer, which further overcomes the influence of noise and random error on measurement accuracy and stability, and greatly improves the temperature measurement accuracy and stability. The maximum measurement error of the whole machine is not more than 0.01 °C.
Share:
PREV：Circuit Design and Formula Calculating Method for Conventional Temperature Measurement Range of PT100 Platinum Resistance Sensor
NEXT：Design of the Drive Circuit of 3 Wire Pt1000