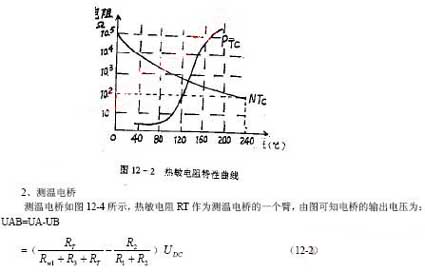 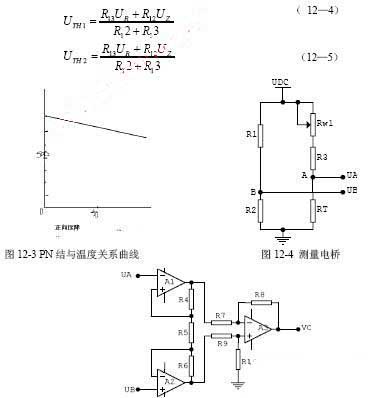 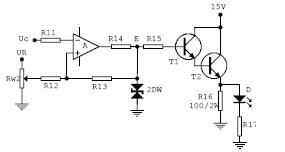 
Changing the reference voltage UR of the hysteresis comparator can change the temperature control range, which is determined by the hysteresis bandwidth UTH1 - UH2 of the comparator. UTH1 and UTH2 can be calculated from the temperature control accuracy required by the design, and the other two values are calculated by the formulas 12-4, 12-5 according to any two of U2, UR, U12, and U13 given by the circuit.
Generally, the heater is controlled by a relay controlled by a switching circuit or a thyristor. Here, it is controlled by a composite pipe composed of T1 and T2. The heater is simulated by a 100/2W resistor. In the experiment, the 100Ω/2W resistor is placed close to the thermistor RT, and the LED D is used for heating.
display.
IV. Reference circuit:
Combine the unit circuits in the design hints to facilitate the operation of the temperature control circuit shown in Figure 12-7.

The control process of the temperature control circuit is:
When the circuit is just turned on, │UA-UB│ is small, VC<UTH1, and point E is high level U2, and T1 and T2 are saturated. The 15V power supply heats 100Ω/2W to increase the heater temperature, and Rr gradually decreases as the temperature increases. UA-UB gradually increases, and UC increases. When UC=UTH1, point E jumps from high level to low level -Uz, T1 and T2 are cut off, the heater stops heating, and the temperature decreases. The increase in the resistance of RT reduces │UA-UB│. When it is reduced to UC=UTH2, the E point is flipped from low level to high level and heated again. If the cycle is repeated, the temperature is made constant.
Requirement: Calculate other parameters of the circuit based on the given component parameters and voltages in the circuit.

V. Installation and commissioning of temperature control circuit
1. First connect the designed temperature control circuit on the experiment board, and then solder it to the printed board after successful debugging.
2. Ground the point B in Figure 12-7, input the DC voltage of -30MV from point A, measure UC, and calculate the magnification of the three-into-differential magnifier.
3. Point B is grounded. Enter a -0.5 - +0.5 continuously adjustable DC voltage from point A. Observe the jump of the E point at the output of the comparator with an oscilloscope, measure and record the input voltage UC when the positive and negative transitions occur at the E point, and draw the hysteresis characteristic curve.
4. Control temperature calibration:
Set the temperature control range to TL-TH. When the temperature control range is calibrated, the RT is placed in the thermostat and is connected to the mercury body of the standard thermometer.
Share:
PREV：Introduction of various types of sensors in smart home appliances
NEXT：What does pt100 mean?