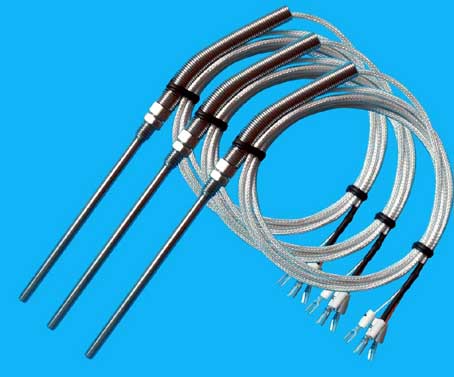 Pt100 temperature sensor probe
The PT100 temperature sensor has three leads. A, B, C (or black, red, yellow) can be used to represent three wires. The following rules exist between the three wires: The resistance between A and B or C is around 110 ohms at room temperature. B and C are 0 ohms, B and C are directly connected internally. In principle, B and C are no different.
There are three fixed terminals for connecting the sensor to the meter:
The A wire is connected to the instrument and is connected to a fixed terminal of the sensor. B and C are connected to the other two fixed terminals on the meter. The positions of the B and C lines are interchangeable, but they must be connected. If there is an indirect extension line, the specifications and length of the three conductors should be the same.
3-wire and 4-wire connection of thermistor: It is a 2-wire, 3-wire, and 4-wire line, which is mainly determined by the secondary instrument used for (selection).


Pt100 temperature sensor probe connection
The general display instrument provides a three-wire connection. The PT100 has one line at one end and two lines at the other end. The inside of the meter is offset by the bridge resistance. Generally, the PLC is four wires, two wires are output at each end, two are connected to the PLC to output a constant current source, and the PLC measures the voltage on the PT100 through the other two, also to offset the wire resistance. The four-wire accuracy is the highest, the third line is also OK, and the two lines are the lowest. The specific usage should consider the accuracy requirements and costs.

Reasons for Three-wire Connection of PT100 Temperature Sensor Probe
The temperature sensor PT100 has a resistance value of 0 to 100 and a resistance change rate of 0.3851 ohm/C. The resistance is small and the sensitivity is high, eliminating the measurement error caused by the wire resistance. The cross-sectional area and length of the three wires are the same (ie, R1 = R2 = R3). The platinum resistance measurement circuit is generally an unbalanced bridge. Platinum guides one (R1) to the power supply end of the bridge. The other two (R2, R3) are connected to the bridge arm of the platinum resistor and its adjacent bridge arm resistance. The bridge is in balance and in a leading position. The change in line resistance has no effect on the measurement results.