The structure and function of ptc thermistor

Barium titanate crystal belongs to a perovskite structure and is a ferroelectric material. Pure barium titanate is an insulating material. In the titanate bismuth material, a small amount of rare earth elements are involved, and after proper heat treatment, the resistivity is increased by several orders of magnitude around the Curie temperature, and the PTC effect occurs. This effect is independent of the ferroelectricity of the BaTiO3 crystal and its phase transition around the Curie temperature. Barium titanate semiconducting porcelain is a polycrystalline raw material with intergranular interfaces between the grains. When the semi-conductive porcelain reaches a certain temperature or voltage, the crystal grain boundary is replaced and the resistance is rapidly changed.

The PTC effect of barium titanate semiconducting porcelain is caused by grain boundaries (grain boundaries). Regarding conductive electrons, the intergranular interface is commensurate with a barrier. When the temperature is low, the resistance value is small due to the inductance of the electric field in the barium titanate, which causes the electron to easily cross the barrier. When the temperature rises up to the Curie point temperature (ie, the critical temperature), the internal electric field is damaged, and it can't help the conductive electrons to cross the barrier. This is commensurate with the rise of the barrier, the increase in the resistance value, and the PTC effect. The physical model of the PTC effect of barium titanate semiconducting porcelain is the sea-surface surface barrier mode, the annihilation mode of the Daniels et al. and the superimposed barrier mode. They have made reasonable comments on the PTC effect from different aspects.

Tests have shown that the resistance-temperature personality of the PTC thermistor can be communicated in the temperature range. The test formula indicates:
RT=RT0expBp(T-T0)
In the formula, the flashing temperature of RT and RT0 is the resistance value at T and T0, and Bp is the raw material constant of the raw material.
The PTC effect begins with the essence of the precipitated phase between the grain boundary and the grain boundary of the ceramic, and is significantly replaced with the type of impurity, concentration, sintering premise, and the like. Recently, a practical temperature-sensitive resistor has a silicon temperature slow component for operating a silicon wafer, which is a highly accurate PTC thermistor. It consists of n-type silicon, and the electron scattering due to the onset of impurities increases as the temperature rises, so that the resistance increases.

The PTC thermistor was presented in 1950, and in 1954, a PTC thermistor with barium titanate as the primary material was presented. The PTC thermistor can be used as a temperature measurement in the production, as well as in the temperature detection and adjustment of a certain part of the car, and also used in civilian equipment. For example, the water temperature of the instant water heater, the temperature of the air conditioner and the cold storage, and the operation of the person to heat the gas to analyze the large wind speed machine. The following is an example of the use of heating and overheating of heaters, motors, transformers, high-power transistors and other electrical appliances.

In addition to being used as a heating element, the PTC thermistor can also act as a "switch", with three elements of slow component, heater and switch, called "thermal switch", as shown in Figures 2 and 3. Shown. After the current is turned on, the temperature rises, that is, the temperature of the heating element rises. When the temperature exceeds the Curie point, the resistance increases, thereby limiting the current increase. The decrease in current causes the component temperature to drop, the decrease in the resistance value causes the circuit current to increase, the component temperature rises, and the cycle is repeated, so that the efficiency of the temperature is maintained in a specific range, and the switching inductance is also exhibited. The operation of this temperature-reducing personality is made into a heating source, and as a heating element, there are a heater, an electric iron, a drying wardrobe, an air conditioner, etc., and the electric appliance can be overheated. 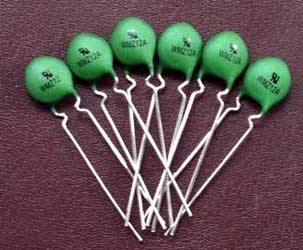