Ptc thermistor working principle and use 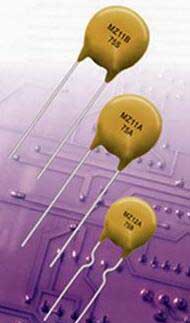 At the operating current, the generated heat and the dissipated heat reach the equilibrium current and can pass normally. When an excessive current is passed, a large amount of heat generated by the component cannot be dissipated in time, resulting in an increase in the temperature of the polymer material. When the temperature reaches the melting temperature of the material, the polymer material aggregates and expands, blocking the conductive path composed of the conductive particles, causing the resistance to rise rapidly, which limits the passage of a large current, thereby providing an overcurrent protection.

What is the role of the ptc thermistor?
PPTC is an abbreviation for Polymeric PosiTIve Temperature Coefficient. The PPTC device is a polymer polymer positive temperature coefficient device that protects the circuit when the current surge is too high and the temperature is too high.

When used, it is connected in series in the circuit. Under normal conditions, its resistance is small and the loss is small, which does not affect the normal operation of the circuit; However, if an overcurrent (such as a short circuit) occurs, its temperature rises, and its resistance value rises sharply, reaching the limit current, and avoiding damage to components in the circuit. When the fault is removed, the temperature of the PPTC device automatically drops and returns to the low-resistance state, so the PPTC device is also called a reversible fuse.
Share:
PREV：The structure and function of ptc thermistor
NEXT：Ptc thermistor parameters