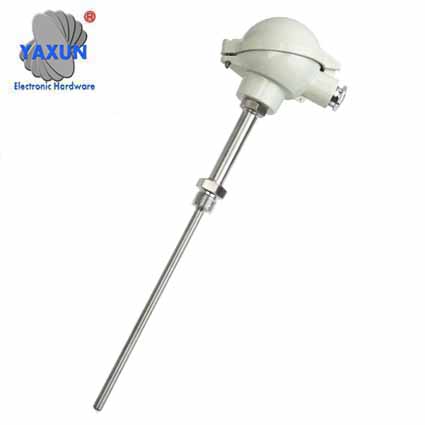 Pure metals are preferably suitable as resistance material. They show greater changes in resistance than alloys. They also have an almost linear relationship between resistance and temperature. Corrosion-resistant platinum is preferably used for reliable measurements, since it shows particularly little aging and since it can be used to manufacture thermometers with low error limits.

Conventional thermometers sensor measure the temperature based on the change in length or volume of a substance and are only suitable as indicating measuring devices. The advantage of resistance thermometers sensor is that they deliver an electrical signal and are suitable for use in industrial measurement technology. 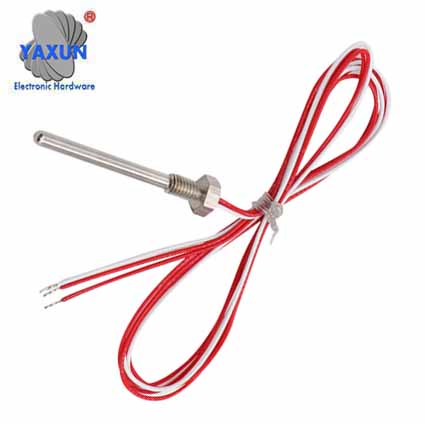 For the platinum resistance thermometers sensor widely used in industrial measurement technology and the measuring resistors used in them, there is a standard in which additional summands are specified for the function behind the linear term.The nominal value is specified, i.e. the resistance at 0 ° C.
Resistors with a nominal value of 100 Ω are preferably used; these sensors are called Pt100. Other common nominal values ​​are 500 Ω and 1000 Ω. Details are given under the heading platinum measuring resistor. The values ​​in the table below are calculated using these equations.

The definition range says nothing about the temperature up to which a measuring resistor or measuring insert can actually be used; the permissible range of application depends on the total materials used and is specified by the manufacturer in the catalog. Platinum resistance thermometers sensor can be used for significantly smaller ranges or, with the appropriate design, extrapolated the characteristic curve down to −250 ° C or +1000 ° C.

A platinum thermometer sensor should be assigned an accuracy class by the manufacturer. In the specified standard, the maximum permissible measurement deviations (limit deviations) are specified for each class: 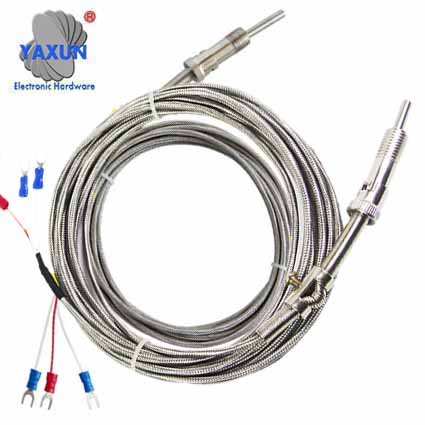 Example for the preferably used class B: At 500 ° C, deviations of the measured value are permissible up to ± 2.8 ° C.
The temperature coefficient of the resistance is specified in the standard somewhat differently than often (and also above) than

i.e. at the reference temperature of 0 ° C instead of 20 ° C. The mean temperature coefficient over the range 0 ... 100 ° C results from and is used as a characterizing value.
if the deviations are in the range of −20… +120 ° C, the amount is less than 0.4 ° C. They are not greater than the limit deviations specified above (error limits due to production fluctuations) in class B.

Normally, measurements are taken and the temperature t is sought. The resolution ("inversion") after t or the linearization (generation of an output signal that is linearly linked not with the resistance but with the temperature) is partly carried out by a transmitter integrated in the measuring insert, see below for measuring circuits.

Compared to platinum, nickel is more sensitive; it provides a greater change in relative resistance for the same change in temperature. However, this material has been removed from the standardization. The following equation applies to the temperature response in the range from −60 ° C to +250 ° C:

Disadvantages in comparison to the platinum measuring resistor are the smaller temperature range (−60… +250 ° C) and the larger limit deviation, especially in the range below 0 ° C.

Silicon measuring resistors can be used in the range of −50… +150 ° C. According to the data sheet, the following equation applies to their temperature response in the range of −30 ... +130 ° C:

In the data sheet mentioned, nominal values are given for 1000 Ω and 2000 Ω with a measuring current of 1 mA with limit deviations of 1… 3%.

There are also integrated circuits with a linearized output signal for the same temperature range, for example with a nominal 1 μA / K or 10 mV / K with a supply voltage of 4 ... 30 V; for example .

NTC thermistors show a highly non-linear relationship between resistance and temperature. The following function is used as a useful approximation of the temperature-dependent resistance, which has the absolute temperature T as an argument:
It decreases quadratically with increasing absolute temperature. In the usual permitted working range between −50 ° C and +125 ° C, this can change by a factor of around 3.

NTC thermistors show poor long-term constancy, change their resistance due to moisture, have a certain memory (resistance depends on the previous history), so that they are not very suitable for measurement purposes. They are used for non-critical temperature monitoring as well as for simple temperature measurements with accuracy requirements of 1… 3 K (example: microcontroller boards, battery temperatures / sensor temperatures in cameras). In these cases, linearization is usually carried out using stored lookup tables.

Depending on the version, NTC thermistors can be used in the range between approximately −55 ° C and a maximum of +250 ° C. They are made in the form of rods, discs or pearls, some of which are encased in glass. 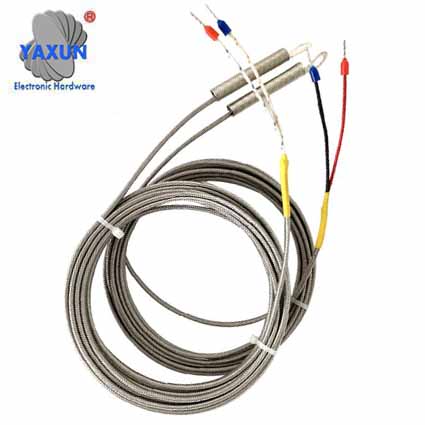 Measuring circuits for resistance thermometer sensor
To measure the resistance, a constant current must flow through the resistance. The applied voltage is an easily measurable signal proportional to the resistance. Often, however, it is not this voltage that is measured, but only its change compared to an initial value by means of a differential circuit (Wheatstone bridge). In order to keep the error due to self-heating low, the measuring current must be as low as possible, typically not higher than one milliampere for Pt100.

In industrial systems, larger distances between the sensor and transmitter often have to be bridged with correspondingly long supply lines. In order to avoid the influence of the resistance of the lines on the measured value, platinum resistance sensors are also manufactured with three or four wire connections. This enables the measuring current to be fed in separately or the feed line error can be compensated. In outdoor areas, installation with three or four ladders is strongly recommended. Alternatively, a first transmitter is already housed in the connection head.

As with all contact thermometers, static and retarding heat conduction influences must be taken into account. In the case of resistance thermometers, the influence of the resistance of the measuring lines can also be considered as a source of error:

Self-heating
The measuring current generates a power loss at the measuring resistor, which is converted into heat and depends on the basic value, the measuring temperature, the design and the heat conduction and capacity. Since a measurement current of 1 mA is generally not exceeded, this power loss with a Pt100 is in the range of a few tenths of a milliwatt and normally does not generate any significant measurement errors. Self-heating only has to be taken into account in rare cases and determined for the respective application under operating conditions.

Hysteresis
The hysteresis is noticeable in that the thermometer no longer measures the same value as before after large temperature changes. It is due to mechanical stresses in the sensor element, which arise from different expansion coefficients of the platinum and the carrier material or, in the case of glass sensors, of the casing. For platinum measuring resistors, this deviation caused by the pretreatment must not be greater than the limit deviation at the test temperature for the respective accuracy class in accordance with a test procedure specified in the associated standard.