China 's first electronic oil pressure sensor
The electrical outlet is matched with the AMP 282080-1 and the threaded connection can be customized according to customer requirements
Adjustable range, up to 1.5MPa
PWM signal output, and with alarm signal output, replace the mechanical sensor to match a variety of moving coil instrument and stepper motor instrument 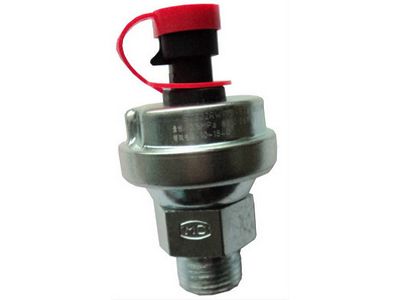 Thick film pressure sensor is the 20th century, 80 years, the emergence of new strain gauge pressure sensor,  the use of printing sintered ceramic elastomer on the thick film resistance of the piezoresistive effect developed. In the ceramic elastic film directly on the printing, sintering four thick film resistors, and through the conduction band connected to the Wheatstone bridge. When the measured level pressure acts on the ceramic elastomer, the elastic membrane undergoes a flexural deformation, At the same time, the thick film resistors printed on the elastic membrane also produce the same size strain, Two thick film resistors are compressive and the resistance decreases. The other two tensile strain, the resistance increases. In this way, the measured pressure value is converted into a bridge output signal, and the signal size is proportional to the pressure.

Classification:
1, semiconductor piezoresistive sensor
This kind of sensor utilizes the piezoresistive effect of the semiconductor. Ordinary semiconductor material strain is better than the strain coefficient of metal material. The use of monocrystalline silicon piezoresistive effect in the monocrystalline silicon based on the use of semiconductor technology components, The semiconductor when subjected to pressure, the resistance will change, thereby forming an output signal of the pressure change. At present, the commonly used piezoresistive sensors are four equivalent strain components to form a electricity bridge, When the role of pressure changes, divided into two pairs of changes in the effect, A pair of bigger, A pair of smaller, Leading to electricity bridge imbalance, Enter a voltage signal proportional to the pressure. Its biggest feature is the high sensitivity, large measurement range, the output signal is strong, easy to achieve integration. But its ability to resist oil and particulate effects is poor, must use the media to isolate it in order to achieve accurate results.


2, the traditional elastic strain sensor
This sensor is characterized by a wide range of measurement, high precision, good stability, And long service life to withstand high temperature, high speed, high pressure and vibration effects, So the car in the detection environment more adaptable. Strain sensors are usually composed of four electricity bridge resistors, the relative group of arm resistance in the pressure is to produce tension changes, While the other is the pressure change, In order to produce the impact on the resistance, the signal size is equal and the opposite sign, Improve the sensitivity of the sensor. The output signal amplitude of this kind of sensor changes little, In the case of severe changes in the temperature environment, Need temperature compensation, But more difficult.

4, ceramic piezoresistive sensor
This kind of sensor is made of ceramic material through a special process made, dry ceramic pressure sensor. Ceramics is a high elasticity, corrosion resistance, wear resistance, anti-vibration of high-quality materials. The thermal stability of ceramics is significantly better than the working range of thick film resistors, its temperature range can reach -40 ℃ ~ 125 ℃, but also in the high temperature still has a high accuracy and stability. Electrical insulation strength> 2kV, the output signal is strong and has long-term stability. The principle of work is: the measured pressure directly on the surface of the ceramic diaphragm, so that the ceramic diaphragm deformation, thick film resistors are printed on the back of the ceramic diaphragm, forming a electricity bridge, in the role of varistor, the electricity bridge will produce a proportional voltage and voltage related to the electrical signal; While the signal is divided according to the pressure range of the gap, and compatible with the sensor sensor. Through the laser calibration, the sensor has a temperature stability and time stability, the sensor comes with temperature compensation, can contact with the vast majority of media and ensure the detection results. But its cost is higher, Promotion also takes time