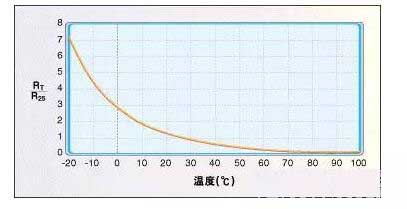 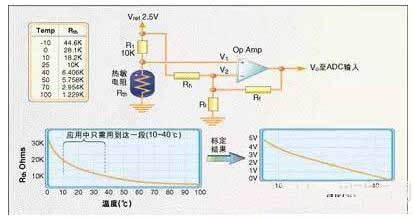 Self-heating problem
Since the thermistor is a resistor, a certain amount of heat is generated when current flows through it. Therefore, the circuit designer should ensure that the pull-up resistor is large enough to prevent the thermistor from self-heating, otherwise the system measures the heat generated by the thermistor rather than the ambient temperature.

The operational amplifier output formula is as follows:
Once the input of the thermistor is calibrated, the actual resistance to temperature can be graphically represented. Since the thermistor is non-linear, it needs to be represented graphically. The system needs to know what the value of the ADC is for each temperature. The accuracy of the table is determined in specific increments of 1 ° C or 5 ° C depending on the specific application.

Cumulative error
When measuring temperature with a thermistor, select the sensor and other components in the input circuit to match the required accuracy. In some cases, a resistor with a precision of 1% is required, and some may require a resistor with a precision of 0.1%. In any case, a table is used to calculate the effect of the cumulative error of all components on the measurement accuracy, including the resistor, the reference voltage, and the thermistor itself.
If you want high precision and want to spend less, you need to calibrate the system after it has been built. Since the board and the thermistor must be replaced in the field, this is generally not recommended. In the case where the device cannot be replaced in the field or the engineer has other methods to monitor the temperature, the software can also be used to create a table of temperature-dependent ADC changes. In this case, the actual temperature value needs to be measured by other tools, and the software can create the corresponding table. For systems where the thermistor must be replaced in the field, the component to be replaced (sensor or the entire analog front end) can be calibrated at the factory and the calibration results saved on a disk or other storage medium. Of course, after component replacement, the software must be able to know the use of the calibrated data. 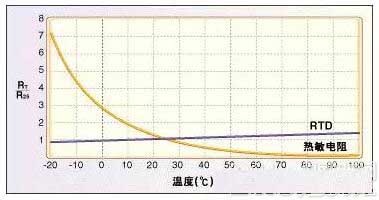 In general, thermistors are a low-cost method of temperature measurement and are simple to use. Below we introduce the resistance temperature detector and the thermocouple temperature sensor.

Thermocouple
Thermocouples are made up of two different metals that generate a small voltage when heated. The magnitude of the voltage depends on the two metallic materials that make up the thermocouple. Iron-constantan (J-type), copper-constantan (T-type) and chrome-aluminum (K-type) thermocouples are the three most commonly used.
Thermocouples produce very small voltages, usually only a few millivolts. The voltage change of the K-type thermocouple temperature is only about 40μV when the temperature changes by 1 °C, so the measurement system should be able to measure the measurement accuracy of the voltage variation of 4μV to reach 0.1 °C.
Since the two different types of metals combine to create a potential difference, the connection of the thermocouple to the measurement system also produces a voltage. The connection point is usually placed on the insulating block to reduce this effect, so that the two nodes are at the same temperature, thereby reducing the error. Sometimes the temperature of the insulation block is also measured to compensate for the effects of temperature (Figure 5). 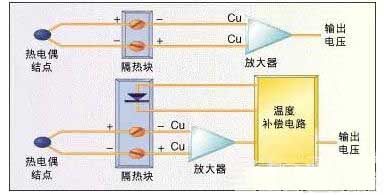 The gain required to measure the thermocouple voltage is typically 100 to 300, and the noise drawn by the thermocouple is amplified by the same factor. A measurement amplifier is typically used to amplify the signal because it removes common mode noise from the thermocouple wires. Thermocouple signal conditioners, such as Analog Devices' AD594/595, are available on the market to simplify hardware interfaces.


Solid state thermal sensor
The simplest semiconductor temperature sensor is a PN junction, such as a PN junction between a diode or a transistor base-emitter. If a constant current flows through the forward biased silicon PN junction, the forward voltage drop is reduced by 1.8 mV for every 1 °C change in temperature. Many ICs use this characteristic of semiconductors to measure temperature, including Maxim's MAX1617, the country's LM335 and LM74. Semiconductor sensors come in a variety of interfaces, from voltage output to serial SPI/microwire interfaces.
There are many types of temperature sensors, and by properly selecting software and hardware, you can find the right sensor for your application.
Share:
PREV：Characteristic and Classification of Temperature Sensors and Detailed Description of Their Structure
NEXT：Design of Signal Conditioning Circuit for Various Temperature Sensors